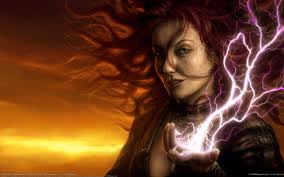 Power spells belong to the Spirital Spell group, and as such are some of the most magical and powerful spells known. Power spells are also known as Force Spells. Force spells deal with unseen forced in the Universe which sometimes protect us and other times hurt us.
Everyone has control of the forces around them at some level, but the more force you control the more powerful your force spells can become. When you use these magical forces to create a shield around you, spells cast against you by another person have a much lower chance of success.

This spell should be cast on Thors day (Thursday). You will need a Thors hammer pendant and 2 red candles. In the hour after sunrise light the candles and place the pendant between them. In a strong and commanding voice say

In your hour on your day
Hear me as I stand and pray
God of thunder
God of might
Lend your power
With this light
In your symbol
Store your strength
Pour it out to me at length.
Wear this pendant whenever you need a power or strength boost.
Hear now the words of the witches, The secrets we hid in the night. The oldest of gods are invoked here, The great work of magic is sought. In this night and in this hour, I call upon the ancient powers. Bring your power to we sisters three, We want the power, give us the power.

Light the candle. Wrap the ribbon loosely around your wrists and hold them out in front of you. When you have finished reciting the spell, allow the ribbon to slide off. If you want, you can then bury or burn it safely; unless you know what the ribbon is made of, you are better off burning it outside, in case of fumes.